Here’s the big scene from Two Bad Pilgrims, where Francis and Johnny nearly scuttle the Mayflower when they fool around with their father’s fowling piece.  First the thumbnail sketch:

Then the tight sketch:

There was some squeamishness about showing two boys firing a gun in a kids’ book, so we tried a different approach.  Sometimes you encounter this kind of snag in the creative process.  Kendra Levin, the editor and Jim Hoover, the art director worked with me to find a solution.  How about if instead of the gun, we show the boys playing with squibs?

What the heck is a squib?  Here’s where my dad, and the Company of Military Historians really came to the rescue.  My dad posted the question in the forum page of the Company’s website.  Turns out a squib is a thin tube of paper or a hollow quill filled with black gunpowder—homemade fireworks.  When you light one it zips around the room.

But, this isn’t really what happened aboard the Mayflower.  More important, it’s not as interesting to look at.  We ultimately struck a compromise and decided to show the boys with the gun, but not actually firing it.

Here’s the inked in version.  Squibs, a barrel of gunpowder, straw ticking on the bunk, old wooden planking—all the ingredients for setting a ship afire.

It seems nuts to have gunpowder just laying around like that, but according to Mourt that’s the way it was.  I know that British warships in Nelson’s time stored all gunpowder in a special room, the magazine.  It was lit by a lamp on the other side of a glass window.  Anyone in the magazine had to wear slippers, because the nail of a shoe grating across powder on the floor would cause a spark, blowing up the ship. 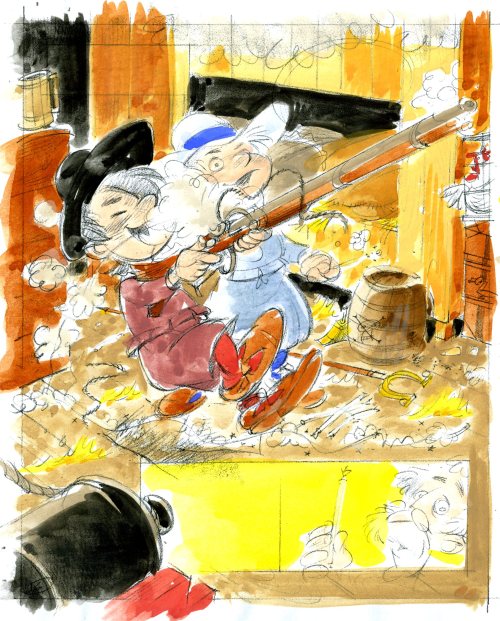