Kerry Martin—senior design editor over at Clarion—sent me all kinds of goodies from the print production of The Famous Nini!

Here are proofs and f&gs.

Proofs show all the spreads from a book.  A spread is two pages side-by-side as they appear in the book, like Pages 14/15.  The printer provides these so the art director may check them for color. 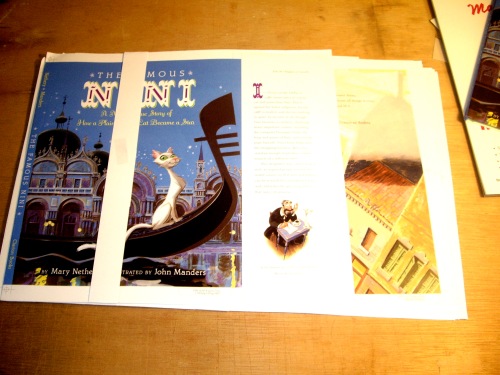 F&Gs—folded & gathered—are the press sheets that have been cut into 2-page pieces then scored and folded.  These are gathered together in sequence (Pages 1 through 32) so you can see how they’ll read as a book.  At this stage it suddenly makes sense that Page 1 and Page 16 should be next to each other.

F&Gs have not yet been stitched together or bound into a cover.

Kerry also generously sent me one of the few hardcover copies—Nini won’t be in stores til June.  More info on book production here.

Yippee!  I’ve been approved; signed the paperwork and forked over my rent & security deposit.  I’ll begin renting a studio space in Oil City’s Transit Building on May Day—the maddest, merriest day of all the glad new year.  In the meantime, those funereal purple walls definitely need a cheerier coat of paint.  Dig those fabulous cast-iron radiators on their marble plinthses (or plinthae?).  I hadn’t fully appreciated the handsome window molding last visit, either.

So, my stuff needs to be packed, I have to call the telephone/internet people, rent a truck, paint the walls, and probably a bunch of other items that I’ve forgotten about.  It will all get done. 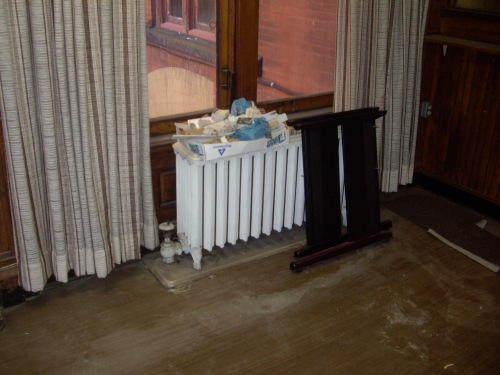 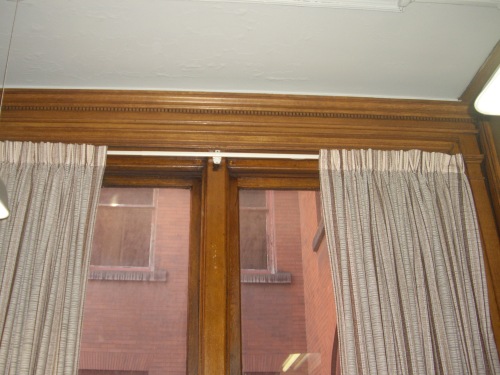 An interesting little article about a real-life Clarence the Copy Cat—although this kitty seems to enjoy his de-mousing duties.

Have a sense of proportion!

My friend Paul sent me the link to this fun time-waster called Balldroppings.

It’s simple: balls drop from a hole on the upper-left corner of your screen.  By clicking and dragging with your mouse you can draw lines on the screen—barriers for the balls to bounce off of.  When a ball hits a line, it sounds a note.  Several lines will play a tune as they’re hit.  I tried to adjust the length of the lines to change the pitch of the notes, but it doesn’t work that way.  I had supposed that by lengthening the line you could lower the pitch, just like in real life.

Which reminded me that the Greek mathematician, Pythagoras, came up with that idea: if you pluck a string it will produce a note.  If you halve that string and pluck it, the note produced will be one octave up on the scale.  Halve it again and pluck it, the note goes up another octave.  So he developed the scale we’re familiar with today, Do-re-mi-fa-so-la-ti-do by using fractions.

How do I know this? you may ask.  I come by this information the hard way.  I watched it in a cartoon. 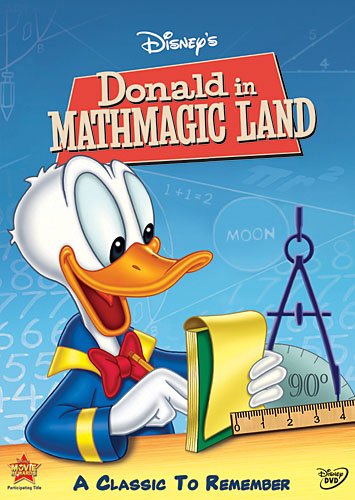 Disney’s Donald in Mathmagic Land is one of my favorite cartoon shorts, and a great teaching tool.  I used to show it to my students when I taught life drawing at Pittsburgh Technical Institute. For a time, the life drawing class was under threat of being dropped from the curriculum because it wasn’t apparent what value drawing the human form had for graphic designers.   The value is: proportion.  If you spend some time drawing human beings, you will acquire a sense of how long an arm is in relation to the size of a foot, how far down on the face the eyes should be, &c, &c.  Even if you never again need to draw a person after you graduate from art school, you’ll still need to see different elements of a design in relationship to each other.

Pythagoras theorized that all beautiful proportions are so because they follow mathematical laws.  His perfect ratio of one thing to another was 1:1.61—the Golden Mean.  Go here to see a diagram of how to arrive at a rectangle using this ratio.

In a brilliant sequence, Donald Duck and we are shown examples from nature and classical art & architecture using Pythagoras’ Golden Mean.

Today in Europe, that ratio is used in standard paper sizes.

Rob Richards captured some of the fantastic background artwork for Donald in Mathmagic Land over at his blog, Animation Backgrounds.

The cartoon is available in DVD (I should update my videocassette) and of course I highly recommend it.  Not only will you gain an appreciation of the relationship between mathematics and beauty, you’ll learn how to cheat at pool.

The April 2010 Pittsburgh Society of Illustrators’ newsletter, PSInside, is here!

Posted in illustration career, self promotion

I’m a big audiobook fan.  While I stand and paint, or drive to out-of-town schools, I devour books by listening to them.

Sally Alexander, a friend of mine through the western Pennsylvania chapter of the Society of Children’s Book Writers & Illustrators, wrote an inspiring piece about her love of audiobooks.

There’ll be some changes made

Okay, right now it doesn’t look like much.  Add a filing cabinet and it becomes an Edward Hopper painting.  But if I’m approved, this is the studio space I’ll be occupying beginning next month.  I need to move out of the dining room and into something different—a place where I can possibly train another younger artist to help me to illustrate picture books. This space is in the Transit Building, Oil City, Pennsylvania.  Used to belong to Rockefeller.  Now it’s an arts center. I’d be surrounded by a variety of other artists.  I really hope this happens! 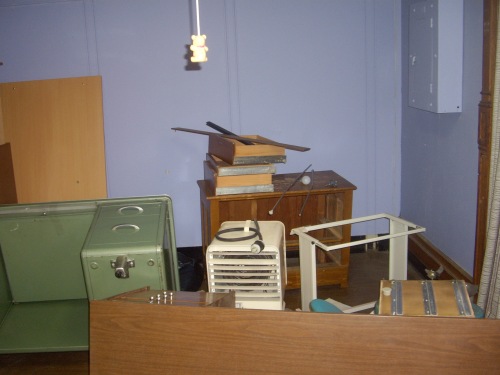 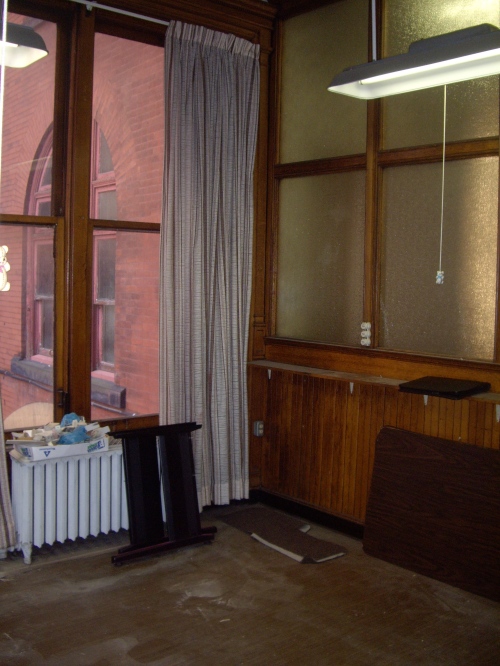 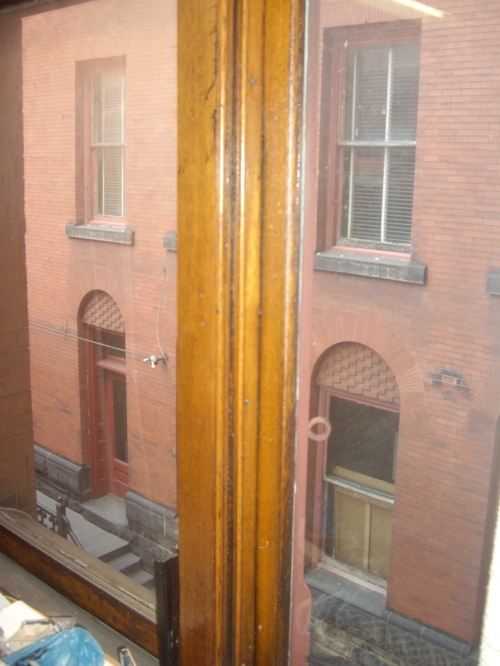 For a truly rip-roaring sea-shanty singalong, you can’t beat this old buccaneer bunny favourite. Nautical rabbits have enjoyed this one for centuries, and can oft be heard belting out a chorus in lusty bunny voices (to the tune of Blow the Man Down):

March has been an incredible month for school visits.  For most of them I’ve dressed as a bunny pirate and read Henry and the Buccaneer Bunnies, followed by a painting demonstration.  While I paint, we all sing Nibble Yer Greens.  A couple of students have asked me where the song came from.  The answer is: several places, mostly from sea-shanties sung by 19th-century British sailors.

Blow the Man Down provided the tune and the form for the refrain: ‘Blow the man down’ is imperative—it’s an order.  The phrase I needed also had to be imperative, so I came up with ‘nibble yer greens.’  Incidentally, Blow the Man Down was also the inspiration for the SpongeBob SquarePants theme song.  Fun fact: Tom Kenny, the voice of SpongeBob, hails from my hometown of Syracuse, New York.  It’s rumored the pirate who sings the theme song is a tribute to cartoon show host Salty Sam, a star of local 1960s Syracuse television.  I remember Salty Sam well.

Back to Nibble Yer Greens.  Some of the lyrics come from Hearts of Oak:

Come cheer up, my lads! ’tis to glory we steer,
To add something more to this wonderful year;
To honour we call you, not press you like slaves,
For who are so free as the sons of the waves?

‘A short life & a merry one’ was the motto of Bartholomew Roberts.

The ‘buck an ear’ gag has been around at least since I was a kid.  I fleshed out the verse with help from Blood Red Roses:

Shiver me timbers, I forgot about my reason for writing this post in the first place!  Last month I visited Northwestern Elementary School, and was treated to a concert by the Second Grade classes.  Each class wrote new lyrics for Nibble Yer Greens—which they sang while their music teacher, Mr Fies, accompanied on the pianoforte.

And now, adieu!—I really mean it this time.

Posted in book promotion, self promotion