Rum diluted with water. On long voyages, sailors might contract scurvy, a disease caused by a lack of Vitamin C. Ship’s doctors eventually realized there is lots of Vitamin C in lemons, so they’d make sure everybody drank their lemon juice by adding it to the grog. Blackbeard Teach liked his with a little gunpowder mixed in.

Posted in self promotion

The black pirate flag with skull & crossed bones.  The earliest pirates—French filibustiers—simply hoisted a red flag to announce their piratical intentions.  It’s not hard to imagine one of the crew darkly describing the flag as “un joli rouge”—a pretty red.

Mark your calendar—September 19th is Talk Like A Pirate Day!

Update: My friend Melanie pointed out that ‘drapeau‘ (flag) is masculine, so I should have spelt ‘joli’, not ‘jolie’. Since corrected! 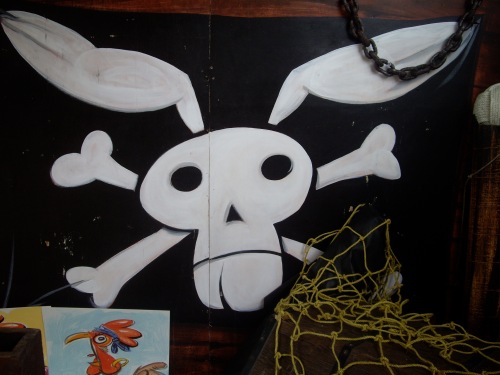 Posted in self promotion