A plumb line or plumb bob.

Last post I rattled on about how the well at Syene was plumb.

Why was it so important to Eratosthenes that the well at Syene (a town located on the Tropic of Cancer) was pointing directly at the Earth’s center at noon on June 21st—the Summer solstice?

The well at Syene

So how did Eratosthenes figure out how big around the Earth is? Here’s how:

First, he assumed the Earth is round like a ball.

Second, he knew several things about a little town called Syene. It is 5,000 stadia (575 miles or 925 kilometers) directly south of Alexandria. There was a well in the center of town, dug deep and plumb—straight toward the Earth’s center. At noon on June 21st, the Summer solstice, you could see the Sun reflected on the water way down in that well, which means the Sun is directly overhead. 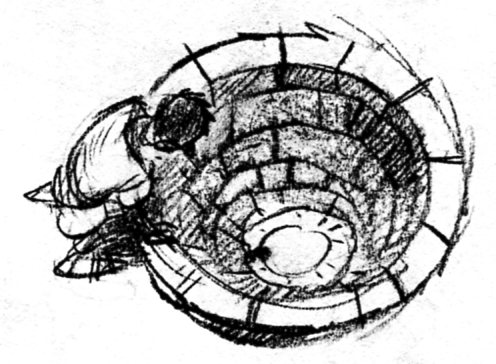 Bird’s-eye view of the Sun’s reflection in the well at Syene.

A stadion is an ancient Greek unit of measurement—it’s 600 feet (an eighth of a mile). Stadion is singular (nominative, singular, second declension); stadia is plural (nominative, plural, second declension). 5,000 stadia = 575 miles or 925 kilometers. I hope I declenched in all the right spots. Many thanks to my Greek-scholar pals Jackie J., Michele J. & Joann W!

Head-Librarian Eratosthenes explains to a student how to laminate a dust jacket.

In an earlier post, I hinted about how over 2,000 years ago somebody calculated the circumference (how big around) of the Earth. This guy did it using only a well, a protractor and a stick (okay, maybe instead of a stick he used a column, but you could use a stick and get the same result).

I’m talking about Eratosthenes, the head librarian at the Great Library of Alexandria. Alexandria is an ancient city in Egypt, located where the Nile River flows into the Mediterranean Sea. Many scholars lived in Alexandria—like Ctesibius, who perfected the water-clock.

If you have a globe handy, you’ll see that there’s a line that goes all the way around the middle of the Earth. That’s the equator. It separates the Earth into a northern half and a southern half. Each half is called a hemisphere—’hemi’ means ‘half’ and ‘sphere’ is another word for ‘globe’.

The Sun appears to travel across the sky, but ackshually the Earth is traveling around the Sun and spinning on her axis at the same time. An axis is the line that goes through the center of the Earth from the North Pole to the South Pole. Did you notice that your globe’s axis is tilted? It’s tilted at a little over 27 degrees, because Earth is tilted at a little over 27° in relation to its orbit around the Sun. Because of this tilt, half the year (the time it takes to orbit the Sun) the Northern Hemisphere receives more of the Sun’s rays. The other half of the year, the Southern Hemisphere receives more of the Sun’s rays. The equator gets the Sun’s rays all year round, so it’s always hot there. 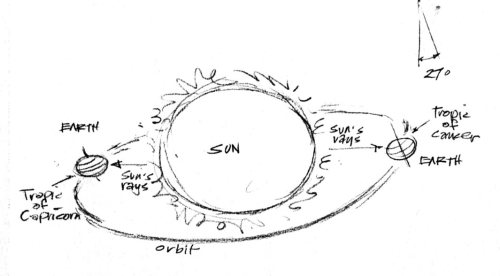 Three months after solstice is the day when the day is split equally in two, with 12 hours of daylight and 12 hours of nighttime. This is the equinox. The autumnal (Fall) equinox is September 22 in the Northern Hemisphere. March 21 is the vernal (Spring) equinox.

Why am I telling you this? Well, over two thousand years ago a Greek librarian figured out exactly how big around the Earth is using only a well and a stick—and he did it at noon during the Summer solstice.

Okay, can I get a do-over? I’m not entirely happy with the drawing I did for that last post about Greek measurements. Didn’t look Greek enough, or just didn’t have pizazz or something. So I drew a new version of it, this time taking the drawings on those wonderful old Grecian urns as my inspiration. Tell me what you think.

Here’s an old Greek urn—these drawings are gorgeous. I love the light terra-cotta-colored figures on a rich black background. 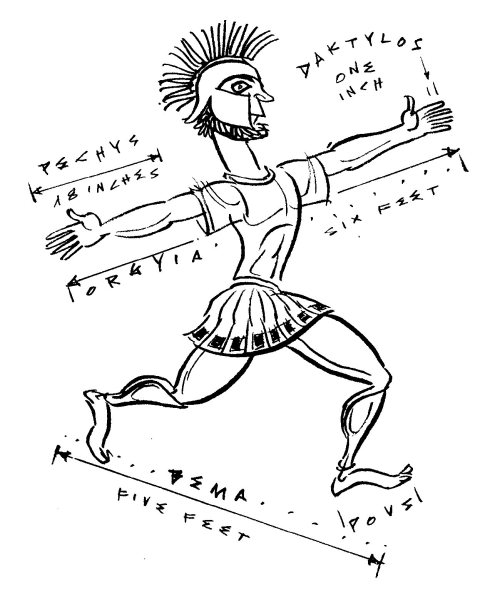 The Greeks measured length roughly the way the Egyptians did: a daktylos is a finger-joint, or inch; a pous is a foot, or 12 inches; a pēchys is a cubit, half a yard, or 18 inches. Longer distances were a bēma, a pace, 5 feet; an orgyia, a fathom, 6 feet; a stadion, 600 feet (an eighth of a mile); a milion, a mile.

One of the important battles in the wars between the Greeks and Persians took place on the Plains of Marathon. Herodotus tells about how in 490 bc, when the Greeks were seriously outnumbered, a messenger named Pheidippides (Fay DIP e deez) ran from Athens to Sparta to get their help. Then he ran to Marathon to join the fight, THEN ran back to Athens to tell everybody that the Greeks won.

Around the world we still celebrate Pheidippides’ heroic run in races called marathons. If you run a marathon, it’s 26 miles and 385 yards—the distance from the Plains of Marathon to Athens. The very fastest runners have done it in a little over 2 hours! 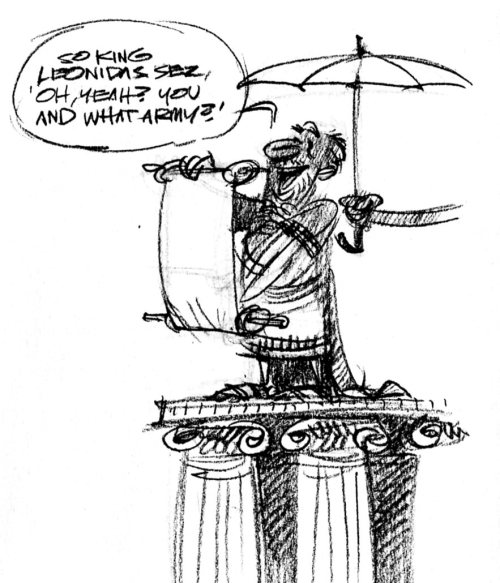 Herodotus reading his Histories to the crowd

“These are the researches of Herodotus of Halicarnassus, which he publishes, in the hope of thereby preserving from decay the remembrance of what men have done, and of preventing the great and wonderful actions of the Greeks and the Barbarians from losing their due meed of glory; and withal to put on record what were their grounds of feuds.”

While the Greeks did think of time as a cycle, there was still a desire to reach back in time to remember stories from the past. We saw how Homer kept alive the story of the siege of Troy through his epic poem, the Iliad.

Herodotus (Hay ROD oh toos) was a Greek who lived in the fourth century bc and is thought to be the first historian. He wrote The Histories mostly about the wars between the Greeks and Persians and how they got started. Herodotus was a great storyteller, but what made him a historian is that he investigated, he did research—he got his information from several sources; he visited the places where the history took place; he went to the library; he interviewed people—then he arranged the information he’d gathered to explain how and why something happened.

I have a paperback copy of The Histories. It’s not an easy read, but I like to ‘dip into’ my copy and read whatever I open to. The battle of Thermopylae is in there—that story has since been made into a graphic novel and movie, The 300—and the battles of Marathon and Salamis. Herodotus included lots of oddball side-stories and observations, which are also fun. The Persian emperors Cyrus, Darius and Xerxes are in there (Xerxes is thought to be the party-boy king Ahasuerus from the biblical Book of Esther).

History is often about the big military battles and wars. I want this history, the one you’re reading right now, to be about ideas. But I’m telling you, if the Greeks hadn’t broken the will of the mighty Persian Empire and eventually beat ‘em, there would have been no flowering of art, literature, philosophy and democracy that happened after the wars—and was the Greeks’ gift to us.