The last king of Rome

Lucius Tarquinius and his Superbus

Lucius Tarquinius Superbus (died 495 BC) was the legendary seventh and final king of Rome, reigning from 535 BC until the popular uprising in 509 BC that led to the establishment of the Roman Republic. He is commonly known as Tarquin the Proud, from his cognomen Superbus (Latin for “proud, arrogant, lofty”).
—from Wikipedia 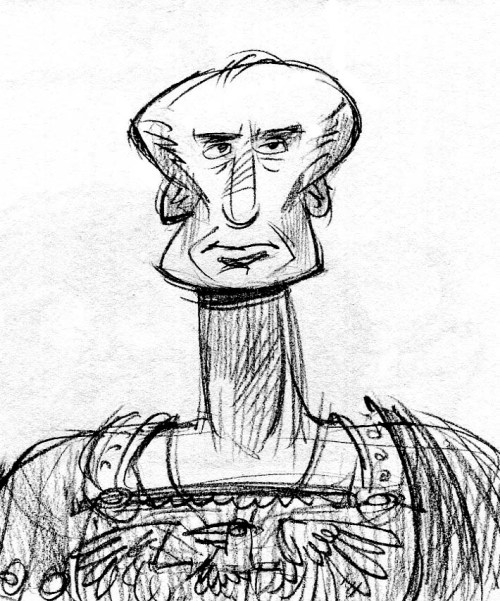 Romulus was the first of seven kings to rule Rome. In 509 bc the last king was tossed out and a republic was created. A republic is where citizens elect representatives to govern them (like how the United States government works). SPQR is an abbreviation for Latin Senatus Populusque Romanus which means ‘The Senate and People of Rome.’

The elected representatives were called a senate. Once in a while some military emergency would come up, and the senate would appoint one guy to be caesar (pronounced KY-zar, means dictator). He was given absolute power. It was meant to be a temporary arrangement. Cincinnatus is remembered for leaving his farm to become caesar and take over the military—he whupped the invading armies then 2 weeks later gave power back to the senate and returned to his farm.

The republic lasted until 45 bc when a Roman general, Gaius Julius, declared himself caesar and began expanding Rome into an empire by conquering territory around the Mediterranean. The Roman Empire eventually reached as far north as England, east into Iran, south into Africa and west to the western edges of France and Morocco. Julius’ nephew, Octavian, became Augustus Caesar—Rome’s first emperor.

Just some sketches. Something softer and more idyllic than my take on the Etruscan statue in the last post. I’m imagining Lupa Capitolina teaching the boys how to become wolves. 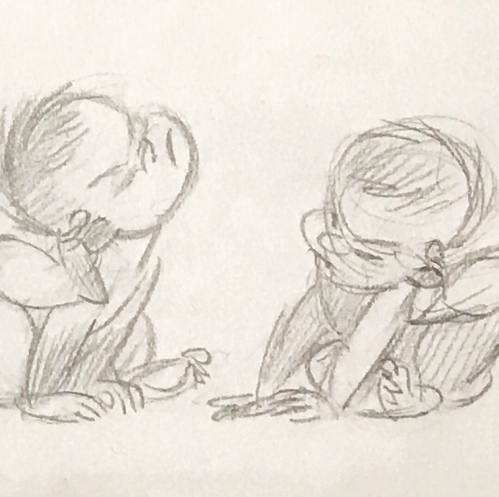 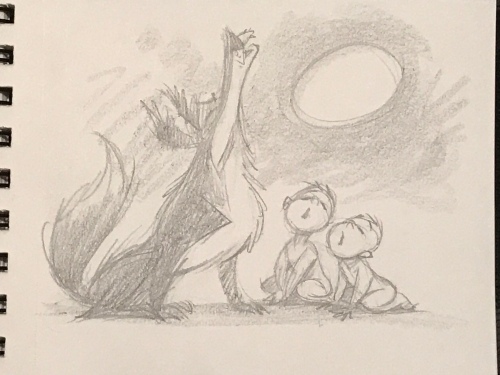 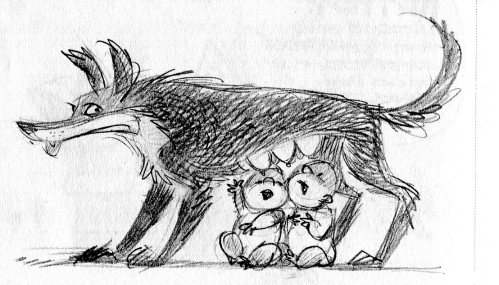 According to the story, here’s how Rome got started: twin baby boys named Romulus and Remus (whose dad was Mars, the god of war) were abandoned in the wilderness of what we now call Italy. A friendly she-wolf discovered the boys and raised them as her own pups. She taught them survival skills, like how to bark at the moon and scratch your ear using your hind paw.

Eventually they grew up and founded a town where they’d been abandoned. It was a perfect spot: on the Tiber river, easy access to the sea, smack in the middle of Italy which is smack in the middle of the Mediterranean Sea. But boys will be boys and these brothers quarreled, argued and fought (they were sons of the god of war, remember). During their most bloody fight, Romulus killed Remus. Romulus took over the town and named it after himself—Rome.

Can you see into the future? Thinking in linear time allows us to think about the future. It’s not easy, of course. People do use a timeline to plan projects and life goals, so that they can make them happen. In fact, I’m using a timeline for this project—writing this history which I plan to make into a book. Do you think about what you’ll be doing in 5 years? Successful people plan for the future. Holy cow, I sound like I’m selling life insurance.

The Torah (what Christians call the Old Testament), with its timeline of many generations of Jews, was read by ordinary people and changed the way ordinary people think about time and themselves.

In the Torah, ordinary people became important. Religious stories of other cultures were about gods and goddesses. Mortal beings had supporting roles in those stories, like when the mortal Paris judged a goddess beauty contest, or the gods created Enkidu to hang out with the semi-divine Gilgamesh. You don’t get a sense that the gods and mortals have a destiny together, because the stories don’t talk about a future. On the other hand, the stories in the Torah are about ordinary mortals who share a past and future with one God. When ordinary mortals—everybody, us—see ourselves as part of a destiny, the way we think about ourselves is changed. A person with a future, a destiny, has free-will and the mindset to break free of a cycle. You can see how a person with the inheritance of generations of history—aligned with God’s—has more free-will than the person who lives only in a cycle, the now, the present.

Thinking in linear time changes our brains. Do you like history? History lovers keep a timeline in their heads. My dad loves history. He was a handy guy to have around when I had history homework. You can give my dad a date in history and he’ll tell you all about what was going on in the world at the time, what people were likely wearing, what they ate, how they got around, who were the big political players. He taught me how to research, how to use a library. When I was awarded the contract to illustrate A Prairie Dog for the President, I phoned Pop who started giving me facts about Lewis & Clark—just off the top of his head. Don’t watch a historical movie with my dad—if they monkeyed with the research he’ll take it apart!

A timeline is a foundation you can build on. If you have a general idea where the big events are on a timeline, you can add new eras and dates in their proper places. A timeline is a fantastic tool for organizing the way you think.

Back to the beginning of The Western Civ User’s Guide to Time & Space.

The Torah and linear time 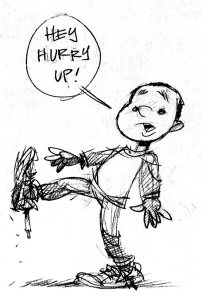 The Hebrew Bible, the Torah, the Old Testament tells the story of the Jews from the beginning of mankind to the time of Babylonian captivity. It’s a long read, but because I’m a sweetheart of a guy, I’ll tell you the entire Torah in one sentence—if you don’t mind standing on one foot:

In the beginning, God creates everything time space the world plants animals and human beings who He tells not to do the wrong things but because the human beings had free will they always do the wrong things Adam & Eve eat the apple of knowledge and the perfect world falls into evil everybody splits up into separate nations and languages God makes a deal with Abraham if you have faith in Me I’ll make you your kids even your great-great-great-great-great-great-great-great-grandkids a great nation Abraham says okay so Abraham son Isaac & grandson Jacob are the fathers of the Israelites everybody moves to Egypt eventually Pharaoh makes them slaves so Moses leads the Israelites out of Egypt God gives them the 10 Commandments they wander around the Middle East for 40 years then settle in Israel the Israelites keep disobeying God they try government by judges like Samson who is really strong because he promised God he wouldn’t cut his hair then kings like Saul who goes a little crazy then David who kills Goliath and writes Psalms but steps out with Bathsheba and wise Solomon who builds the temple but has 700 wives and worships other gods so it doesn’t work out so good and the kingdom splits into Israel & Judah the nations next door come in and conquer first Israel then Judah and cart everybody off to Babylon and Persia the prophets tell us where everything went wrong and what we need to do better from now on.

Okay, you can put your other foot down now. The Torah tells the story of a long parade of generations—“so-and-so begat so-and-so, who begat…” Those stories are told in linear time. Linear time is the natural medium for telling about many generations of people.

We claim who we are by telling our stories. There’s a reason the Torah was written down during the Babylonian Captivity. The Jews, separated from their homeland and their Temple, told us who they are by committing the Torah to paper. Without their own place, the priestly writers emphasized time—and made it sacred.

More about the Major Prophets: , Isaiah, Jeremiah, Ezekiel and Daniel.

Side note: Hebrews, Israelites and Jews refer to the same people. They were Hebrews up until Jacob wrestled with an angel and was renamed Israel (means ‘wrestles with God’) and his people renamed themselves Israelites. At the time of the Babylonian Captivity, Jews is what the Persians called people from Judah (because Israel had been wiped out). Of course there’s some overlap.

Welcome to viewers from Norway—please make yourself at home! 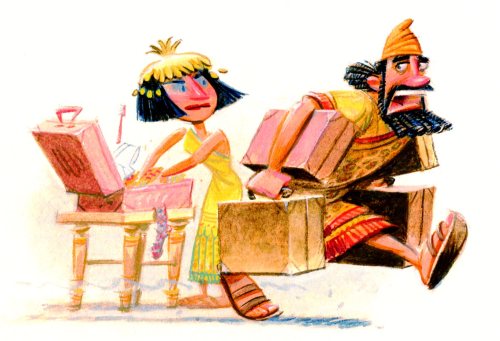 Back when we were talking about the Sumerians of Mesopotamia, I mentioned that Ur was the city Abram left so that he could become Abraham. Whatever became of him? Well, he and his wife Sarai (later Sarah) answered the call of the Lord and set up shop in Canaan—more or less the same place as modern Israel.

Click over here and scroll down to see a map—Ur is lower-right just above the globe. They traveled due west to reach Canaan (with a side-trip to Egypt).

Abraham was the forefather of the Hebrews, the Israelites, the Jews. He and they were (and are) monotheistic—they worshiped one God (mono = one, theo/deo = god). As we’ve seen, the Sumerians, Egyptians and Greeks had religions with more than one god—they were polytheistic. Worshiping only one God was a big deal. It made the Hebrews different from everybody else. Abraham’s story begins in the very last verse of Genesis Chapter 11 if you have a Bible handy.

Side note: adding the ‘h’ to Sarai’s and Abram’s names signifies ‘of many.’ ‘Abram’ meant ‘father,’ ‘Abraham’ means ‘father of many.’ ‘Sarai’ meant ‘princess,’ ‘Sarah’ means ‘princess of many.’ God was keeping up His end of the deal by making Abraham the father of the Hebrews (Genesis 17:5).

Back to the beginning of The Western Civ User’s Guide to Time & Space.