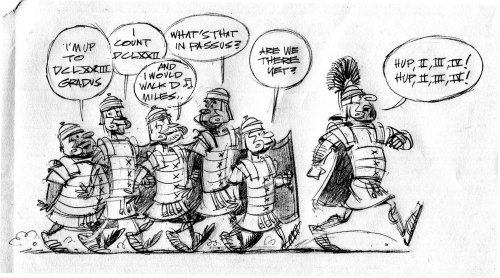 The Romans were geniuses at organization. The way they organized their government and army/navy is how they could maintain such a huge empire. The Romans found that standardization really helped—from soldiers’ armor to the width of a chariot wheel to money to constructing roads.

Good roads are important to a maintain a huge empire, especially for moving armies quickly from one place to another. It’s vital to know exact distances, too, if you are planning a big march with thousands of soldiers. We know that one Roman mile is 1,000 passus—paces—or 5,000 gradus—steps. The problem is, it’s too easy to lose count of all those steps. How do you measure a mile and know for sure you didn’t lose count?

One response to “Measuring long distances”