You got some change coming

It may have been time-consuming to send a letter across the Roman Empire (especially by today’s standards), but the Christians spread their new religion fairly quickly. You can read in The Acts of The Apostles how Christians traveled from town to town, telling people about the Gospel. Roman roads went everywhere and were well-maintained. The Roman army kept the roads safe. Roman soldiers who’d adopted Christianity spread the Word to far-flung regions of the empire where they were garrisoned.

In earlier posts I talked about how Christians were persecuted when they were a religious minority. Emperor Constantine turned that around when he became a Christian himself and issued the Edict of Milan, which made it legal for Romans to practice whatever religion they chose.

Christians learned how to build their religion mostly thanks to letters from Saint Paul. Saint Paul was a missionary who organized Christian thought. His letters are in the New Testament of the Bible. There were still issues to iron out, so in ad 325, Constantine got all the Christian leaders together in the Anatolian town of Nicaea to agree on what Christians believe. They wrote the Nicene Creed, which Christians still recite today (you can find it in the back of your gray hymnal). 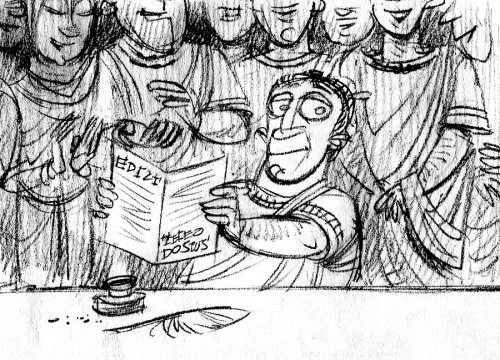 Finally, in ad 380, Emperor Theodosius issued the Edict of Thessalonica, which made Christianity the official religion of the Roman Empire.

I spent a few posts here showing you how Christianity grew within the Roman Empire; then became the official religion; the empire split into eastern and western halves; and each half developed its own culture. I wrote earlier how the Torah (the Hebrew Bible, what Christians call the Old Testament) changed the way people thought about time: as a line, not a circle.

Christianity In The Roman Empire