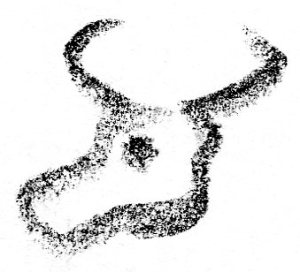 Sometimes a symbol stood for a sound. The hieroglyph that looks like an ox’s head was called ‘Aleph’ (AH-leff). Imagine you’re an ancient Egyptian scribe. If you drew (Aleph) and added ‘my heart in San Francisco’ readers would get the meaning without you having to draw all the symbols for ‘I left’—like a picture of a guy walking away or a picture of something being left behind. 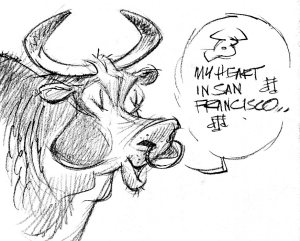 Using the aleph symbol that way is a ‘rebus.’ If you’ve ever been in a doctor’s waiting room with kids’ magazines on the coffee table, you’ve probably seen a rebus in them. Rebus symbols are different from the rest of hieroglyphics because rebus symbols represent a sound. Not only that, but the sound can have nothing to do with what the symbol originally represented. The reader sees an ox head and hears the sound ‘aleph’ but doesn’t think about cows or draft animals or plowing.

https://www.youtube.com/watch?v=r6DUwMnDxEs
https://www.ancient-hebrew.org/ancient-alphabet/aleph.htm
https://www.dictionary.com/e/a/
Okay, some of these are true rebuses, some aren’t. If you have to spell out the word ‘ha’ in a dialogue balloon, why show a girl laughing? Same with a picture of a cat ‘-T’ to get ‘CA.’ If we already know how to spell, we don’t need the rebus.
https://kidpillar.com/free-rebus-puzzles-for-kids/

One response to “Rebus”