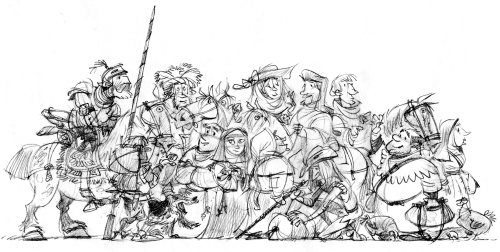 Assembling the pilgrims at the Tabard Inn

Whan that Aprille with his shoures soote
The droghte of Marche hath perced to the roote,
And bathed every veyne in swich licour,
Of which vertu engendred is the flour;

It’s the first four lines of The Canterbury Tales http://sites.fas.harvard.edu/~chaucer/gp-aloud.htm

The English author Geoffrey (sounds like the American name Jeffrey) Chaucer wrote The Canterbury Tales in Middle English over the years from 1387 to 1400. It’s a frame narrative—it’s a story made up of stories. The frame, the set-up, is that a group of people are gathered at an inn, about to start their pilgrimage to Saint Thomas á Becket’s shrine in Canterbury (pilgrimage is something devout believers do, a way of connecting with God. You travel, but also pray. Today, Christians and Jews make a pilgrimage to Jerusalem; Muslims make a hajj to Mecca). It’s a longish trip so the innkeeper says, “Let’s have a storytelling contest along the way. The prize for best story will be a free dinner when we get back.” So off they go.

People of every social class—nobility, clergy and peasantry—went on pilgrimages. A pilgrimage was an ideal situation for a writer doing social commentary. The story each character tells reflects an aspect of life in England at the time. The upper-class knight tells a story about chivalry and romance; the peasants tell bawdy stories and take verbal swipes at each other; the narrator tells a boring story in rhyme; the pardoner tells a moralizing story about how greed kills.

The Canterbury Tales wasn’t the first book written in English rather than Latin, but it was a bestseller—especially when William Caxton printed it in 1483.

I ought to point out that as authors like Chaucer pioneered writing in their own language, they also shaped their language. Choices the authors made about spelling, grammar and syntax became established standards because they were being written down. Likewise, the early printers like William Caxton were establishing standards for books: size of paper and typeface design. I’ll get back to that in a few posts.

There are 24 (?) individual tales. I don’t think I’ll do my usual patented Western-Lit-In-Only-One-Sentence ® treatment of The Canterbury Tales because there’s some adult stuff in there that I can’t avoid since the adult stuff is the central part of some of these stories. As a Sunday school teacher who specialized in the Old Testament I got pretty good at covering those awkward family relationship moments in the Bible without actually—you know—saying what was going on but Chaucer taxes my poor powers of, uh—dissembling. I want you to enjoy your carefree middle-school-aged childhood innocence unfettered by the concerns of carpenters whose wives might be stepping out on them. You can read summaries of The Tales in the links below.

Of course the matrons of River City had Chaucer’s number. How I adore this—https://www.youtube.com/watch?v=mvhFs2bdRpE