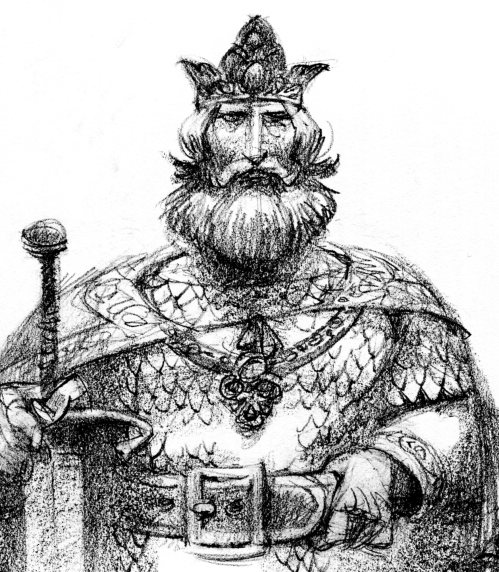 sketch of King Arthur based on a painting by Howard Pyle

Thomas Malory was a gifted writer (and convict*) who in 1470 brought the Arthurian stories together and organized them into a grand epic novel. His book has a French title, Le Morte d’Arthur (The Death of Arthur), though the text is Middle English with some French and Latin thrown in. The title is kind of a spoiler. For a while Britain was ruled justly and happily, but Camelot was ultimately doomed because nothing lasts forever. The high ideals that shaped Arthur’s reign were abandoned with the passage of time. Even knights of the Round Table are born weak and live in a broken world. Arthur’s closest allies betrayed him. His court fell apart. It was fun while it lasted. And yet, Malory gives us hope that Arthur and Camelot may return someday: on Arthur’s tomb is written, ‘Hic jacet Arthurus Rex quondam Rexque futurus’ (Here lies Arthur, the once and future king).

I was a King Arthur geek when I was a tween. I did read Malory’s book and it was a glorious long slog. The version I read wasn’t in Middle English but somehow had the flavor of it (it was a library book and I can’t remember who translated it). Malory built the ‘once and future’ Camelot** word by word—the fellowship of the Table Round; the knights with their odd mannerisms and creaky old way of speaking; the exalted idealism; the shameful weaknesses. He showed me a sword magically embedded in an anvil and stone; a lady, naked as a needle, cursed to stand in boiling water until she was rescued by a very pure knight; a weird animal whose belly made the noise of a pack of hounds; ogres; giants; awkward love triangles; the Holy Grail (the cup Christ drank from at the Last Supper). Malory conjured a dear old island that stood in that very misty spot where paganism hadn’t quite taken its leave and Christianity was just getting started.

* Malory wrote Le Morte d’Arthur while he was serving time—probably as a political prisoner—at Newgate Prison. The prisons of the Middle Ages seem to have been full to bursting with authors cranking out the classics of Western Lit.