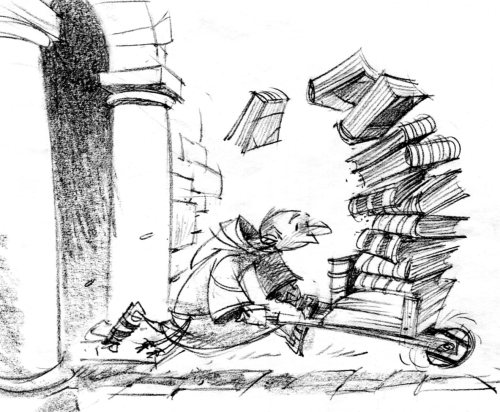 Your books will ship in 1-2 business days!

All of Charlemagne’s and Alcuin’s hard work paid off. The scriptoria were busy cranking out books using Alcuin’s new Carolingian-style letters (did you know Charlemagne’s sister Sister Gisele ran a scriptorium?) and choirs were singing those beautiful polyphonic hymns. Charlemagne’s push for education and culture inspired collections of schools to become universities—who clamored for even more books. 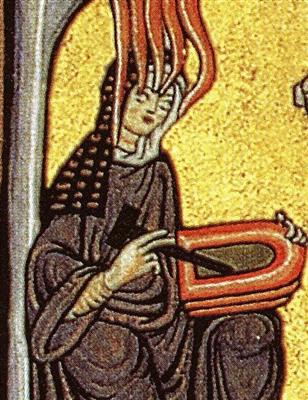 Sister Hildegard would do just about anything to improve the lighting in her scriptorium. 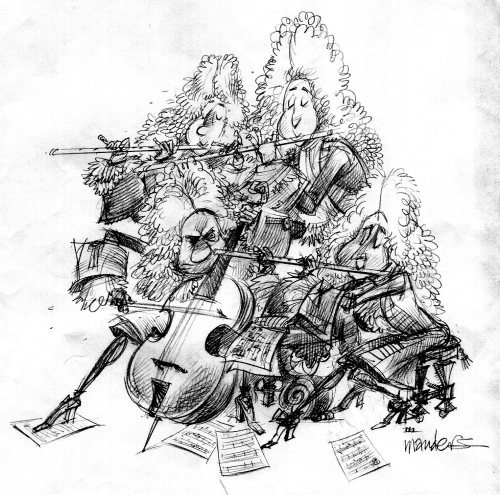 A bewigged quartet of musicians I drew for my pals at the good ol’ Renaissance & Baroque Society of Pittsburgh some years ago. Did Alcuin have any idea his invention would eventually come to this?

It wasn’t long before musicians figured out they could use notation to write several tunes into the same song: tunes that harmonize with or play against the main tune and enrich it. This is called polyphony.

Alcuin’s invention makes it possible to write fugues and symphonies and operas with parts for an entire orchestra of musical instruments and many human voices. Other cultures nowadays may write and perform symphonies, but they couldn’t do it without Alcuin and Charlemagne and the Holy Roman Empire.

This guy, Alcuin. Not only did he run Charlemagne’s palace school, standardize calligraphy throughout the Holy Roman Empire, invent punctuation (like the question mark), set up the way Latin ought to be pronounced in church—he invented musical notation, too.

It got under Charlemagne’s skin that the Empire’s churches and monasteries sang the same hymns but each church gave a hymn a different tune. Charlemagne was relentless in his campaign to standardize everything. He put Alcuin in charge of making sure every choir sang the same tune. So Alcuin invented musical notation.

Musical notation was meant simply to record the tune of a song. Each note represents a particular pitch, depending on where it sits on a scale. The scale is horizontal lines—it’s a frame of reference. Notes at the top of the scale are sung higher than notes at the bottom of the scale. Thanks to Alcuin, choirs throughout the Empire knew exactly what tune to sing just by looking at the written musical notes.

Charlemagne had a problem. He had an empire full of churches and no two of them sang a hymn the same way. They knew the words, but it was tough to remember the tune for every hymn. Remember, there was often a lot of distance between churches. Communication of words was made easier with the standardization of writing. Tunes you had to memorize. Maybe by the time a monk got from one church to another he might forget the tunes to all the hymns and te Deums and requiems and responsories. So they made ‘em up. One church might sing a hymn to a particular tune:
https://www.youtube.com/watch?v=60euxXvw5aA
And another church would sing the same hymn but with an entirely different tune:
https://www.youtube.com/watch?v=B0EN_Hmq534