The die is cast! Part II 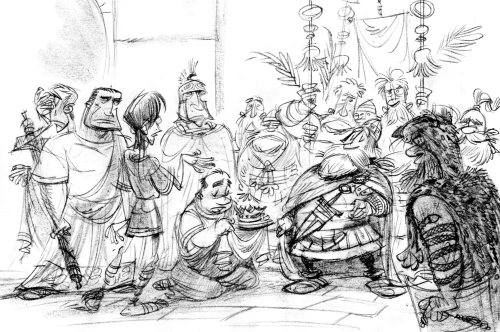 …so after Julian gets killed by the Persians the next emperor Jovian says okay let’s forgive & forget he also stops massacring Christians up next the 2 brothers Valentian I and Valens decide east is east and west is west they split up the Empire for good Valentian I gets the western half and fights the Alemanni, Burgundians, Saxons, Scots, Picts, Ostrogoths, Quadi and Sarmatians until he dies of a burst blood vessel (there was a lot of that going around) Valens gets the eastern half and fights the Huns, Goths, Vandals, Visigoths until he’s killed at the battle of Hadrianople then Valentian I’s son Gratian likes to step out dressed like a Scythian—Scythians, Tartars & Huns: tribes from the Asian steppes—and is assassinated by Maximus who wants to be emperor but is killed by Theodosius I the Great’s soldiers in battle in ad 388 Theodosius I the Great is a really great military leader who defeats all the barbarians and makes peace for awhile he keeps Maximus from killing Valentinian II, too and Christian doctrine is sorted out for instance Theodosius gets rid of Arianism (Arius said Jesus wasn’t divine) and says no more pagan idol-worshiping (saints & relics are okay, though) teen-aged Valentinian II takes over in the west but Arbogastes (a Frank) gives him the coup de grâce as soon as he’s old enough to drive next the usurper Eugenius steps up and Theodosius I’s soldiers kill him Theodosius I’s kid Arcadius is next up in the east but he’s weak sauce and Arcadius’ cabinet runs the show meanwhile in the west Theodosius I’s other kid sleepy Honorius is emperor but General Stilicho has the military power he fights Alaric & his Goths, Vandals, Suevi, Alani and Burgundians but he’s disgraced & executed in 408 the wheels are beginning to come off the Roman Empire: there’s plague, Alaric the Goth sacks Rome and after Alaric dies Honorius makes a treaty with Adolphus who marries Honorius’ sister Placidia there are revolts in Spain and Gaul; the Suevi and Vandals invade Spain; Adolphus gets assassinated; the Merovingian kings start getting Burgundians, Franks and Goths on the same page in Gaul; then everybody in Britain revolts so they’re left to themselves until the Saxons invade ‘em but before that happens Honorius drops dead of dropsy in 423 some guy named John usurps the western throne for 3 years then Placidia’s kid Valentinian III is up even though he’s a kid so Placidia runs things the generals squabble and bicker and there’s a lot of fighting each other as well as fighting the barbarians so Attila the Hun invades Persia, then Gaul, then Italy but dies of a burst blood vessel in 453 (I’m telling you, dying of burst blood vessels was a thing) Valentinian III murders his general Aetius then he gets fresh with Mrs Maximus so Maximus kills him in ad 455 (different Maximus from Theodosius I’s Maximus who was killed in 388), Arcadius’ kid Theodosius II rules the eastern half for a couple of years then his brother-in-law Marcian, on the western side we got Maximus who got fresh with the widowed empress Eudoxia so she got some Vandals to throw rocks at him and he’s killed after that the Vandals sack Rome then Avitus is emperor for a bit then deposed Theodoric II beats the Suevi in Spain then Marjorian takes over in ad 457 after him comes Severus but Ricimer is the real boss after him Anthemius who tried to beat the Vandals but he couldn’t close the deal so Rome is sacked by Ricimer and Anthemius gets killed next up Olybrius then Ricimer dies then Julian Nepos who is assassinated, then Glycerius, finally teen-aged Romulus Augustulus in ad 476—and it’s the end of the Western Roman Empire when he surrenders his crown to Odoacer the barbarian…

The die is cast!

It’s time once again! The moment you were all hoping for: Gibbon’s Decline and Fall of The Roman Empire is getting my patented Western-Lit-In-Only-One-Sentence ® treatment. I’ll try to do it all at once without fainting from oxygen deprivation. Hang onto your laurel wreath tiaras ‘cause here we go:

Julius is a Roman general who is really good at coming at, seeing and conquering everybody he has a big army who likes him so he thinks “Hey, why not conquer Rome?” they cross the Rubicon River and after that there’s no turning back the Republic is over, baby he uses his army to take over Rome and run the whole show until he’s assassinated by some senators then it’s civil war between Marc Antony and Julius’ nephew Augustus—Augustus wins and becomes Rome’s first emperor then his stepson Tiberius who is a good general takes over but he’s pretty gloomy then it’s Caligula who tries to appoint his horse to be a consul but the army kills him then Claudius who walks with a limp and has a show on PBS next up is Nero who fiddles while Rome burns and blames the fire on the Christians Nero kills himself so another civil war and there are 4 emperors in one year: Galba, Vitellius, Otho and last is Vespasian who sticks around for 10 years then his son Titus takes over for 2 years and Titus’ brother Domitian for 15 years then there is Nerva then Trajan who has a column with some nice lettering and Hadrian who builds a wall in England to keep the Picts out Gibbon really liked Antoninus Pius and Marcus Aurelius Antoninus but Marcus’ son Commodus is a nutjob who likes to play gladiator (Russell Crowe had to fight him in the movie) then there were 5 emperors in one year the fifth one Septimus Severus had an 18-year term his son Caracalla was in for 6 years until he was murdered after him I can quote in elegaics all the crimes of Heliogabalus who is murdered then his cousin Alexander Severus (assassinated) after him for 3 years Maximinus of Thrace so he celebrated his coronation anniversary thrice then is assassinated and Gordian III is assassinated who’s next? Phillip who is killed in battle and then Decius who is killed in battle just for laughs let’s remember the old empires run by the Assyrians, Medes Babylonians, then Persians okay back to ad 251: Gallus is around for 2 years, there’s a civil war then Valerian rules from the eastern half then his son Gallienus rules from the west again Claudius II keeps the Goths out but dies of the plague Aurelian defeats just about all of Rome’s enemies but he’s cruel and gets assassinated then for 9 years we get in quick succession Tacitus, Probus, Carus, Carinus, Numerian who are all killed by their own soldiers then Diocletian says “This place is pretty big, maybe we should have 3 emperors at the same time” so he and Maximian, Galerius & Constantius Chlorus then Severus, Maximinus Daia, Constantine, Maxentius, Licinius try to work out a tetrarchy but there’s more civil war until Constantine the Great takes over he changes Byzantium to Constantinople and converts to Christianity, makes it okay to worship Jesus and sets up a lot of Christian doctrine but, oh! his kids: Constantine (slain), Constans (murdered), Constantius II (persecuted and exiled), Magnentius (suicide) and Vetranio meanwhile there’s a war in Persia and another civil war, Sarmatian and Quadian wars, Sapor invades Mesopotamia, Germans invade Gaul and the Greek and Latin churches start arguing Constantine’s nephew Gallus is executed by Constantius II and nephew Julian massacres Christians, invades Assyria and Mesopotamia, is killed by the Persians…

Please hold while I speed-read through Gibbon

Yes, yes, I know—I’m late with today’s post. I’m working on it! I’m giving Gibbon’s Decline and Fall of The Roman Empire my patented Western-Lit-In-Only-One-Sentence ® treatment. Six volumes is taking a little longer than I thought it would. To keep my devoted readers happy while you wait, I thoughtfully provide you with links to some Roman Empire hold-music:

Edward Gibbon published The Decline and Fall in 1776

Edward Gibbon tells the whole sad story in his fascinating six-volume book, The Decline and Fall of the Roman Empire. I do recommend it. It’s not for everybody. You probably want to wait until you’re a senior in high school to read it. You need to be a reader who really enjoys reading—it takes a little while to catch on to the rhythm of Gibbon’s writing and the slightly different meanings of some words written two and a half centuries ago. Once you manage that, I promise it’ll be a rewarding experience. It will also be a horrifying experience if you pay attention to what our own idiot political & cultural elites are up to. Having read Gibbon, you’ll view each day’s top news stories with mounting panic and maybe do something drastic like start writing a history blog.

https://www.goodreads.com/book/show/19400.The_Decline_and_Fall_of_the_Roman_Empire
Decline and Fall is available in an abridged (shortened) version, which is the one I read: https://www.penguinrandomhouse.com/books/59496/the-decline-and-fall-of-the-roman-empire-by-edward-gibbon/
and in audio: https://www.audiobooks.com/audiobook/decline-and-fall-of-the-roman-empire-vol-i/244636 It costs 40 bucks so check with your librarian to see if you can borrow it. Librarians are helpful people and can save you a buttload of cash.
A thoughtful entry by a Wiki editor—worth the read: https://en.wikipedia.org/wiki/The_History_of_the_Decline_and_Fall_of_the_Roman_Empire

The sack of Rome

Alaric and the Visigoths sack Rome in ad 410

Welp, once again I’ve gotten ahead of myself by focusing with laser intensity on a single subject: how Romance languages were born from Latin. I think we should back up a bit and look at the big picture.

The big picture is: the Roman Empire had gotten too big. It was really difficult for one guy to manage. At its startup, the Empire had Augustus and then the 5 ‘good’ emperors who had the necessary skills to run the show. After that, there was a slow decline brought on by corruption, everybody-in-the-government’s lust for power, political instability, mismanagement of the economy (debasement of currency), over-reliance on a work-for-hire military, use of slave labor, religious intolerance, weak morals, and the ever-present threat of invasion from kingdoms and tribes at the Empire’s borders. Those tribes sacked the city of Rome in ad 410 and by 476 the Empire was over. I’m speaking of the western half of the Empire. The eastern Byzantine half carried on after the western half’s fall for a thousand more years.