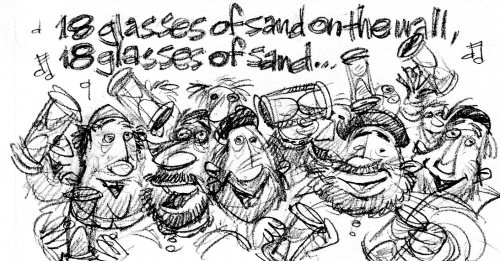 According to inventory records, the Portuguese navigator Ferdinand Magellan had 18 hourglasses on each of his ships during his circumnavigation of the globe in 1522. I’ve read this fact in more than one source, but no one tells us why eighteen. Multiple hourglasses would allow you to check one against another for accuracy, but 18 seems like a lot for that purpose. Were all 18 used at the same time? You need only one sandglass to cast a log—and that sandglass would count minutes, not a whole hour.

It seems Magellan used the hourglasses mainly for keeping track of time. But why did he need 18 of them?

If anyone can tell me I’ll draw you a picture.

Are we there yet?

Columbus had a feeling his crew would start getting antsy, so he kept 2 logs. A captain’s log is a daily record of data: ship’s speeds, changes in course, weather and other news. In one secret log Columbus was honest—he wrote the actual distances they had come each day (as far as he could tell). In the second log, Columbus wrote that they hadn’t come very far at all. He added some potty stops they hadn’t taken. That’s the log he showed his crew. He wanted them to not be upset that the voyage was taking so long.

You can see it was no easy trip. When you weren’t sunburnt from shlepping across a desert you were frozen from climbing over the mountains.

I mentioned sometime back that a feature of civilization is that people like to buy and sell stuff. This is called commerce, where you trade something you have for something you want. The people of Western Europe traded with people of other civilizations—even as far away as China.

Trade goods were carried by merchants from Europe to China and back. They traveled along the Silk Road (actually several roads or routes) that crossed the whole continent of Asia. They’d take goods from Europe like horses, grapes, honey, gold & silver and trade them for Chinese goods like silk, tea, spices, rice, paper and gunpowder.

The Silk Road was originally set up by China’s Han Dynasty in 130 bc. Merchants didn’t necessarily travel its entire length—there were trading posts along the way. One section of the Silk Road was the Persian Royal Road. It was used as early as 500 bc to send messages across the MidEast. Messengers would stop at changing posts to hop on a fresh horse.

There is a mention of an hourglass in a ship’s inventory in the 1300s.

When you need to know where you are at sea, this is what you have to go on.

At sea, it’s difficult to know exactly where you are. No landmarks. No way to tell how far you are from land. Sailors had to be creative. To figure out distance, they used time. 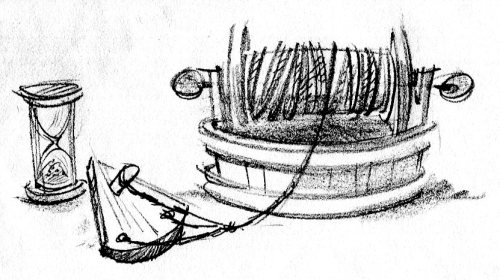 Sailors liked the hourglass because it isn’t as affected by a ship’s bouncing around on the waves as a water-clock would be—it still marks an hour accurately. Smaller sandglasses with less sand mark shorter periods of time. Sailors could judge how fast their ship were traveling by ‘casting the log.’ They had a length of line—heavy cord—with a piece of wood (the log) tied to its end, and knots tied in it at regular intervals. They’d throw the log into the sea and turn the glass at the same time. The log dragged behind and pulled the line with it. When the sand ran out, they’d nip the line and count how many knots had run out. Number of knots = distance traveled in a set space of time.

If you know how fast you’re traveling, you can make a guess how far you traveled in an hour or a day or a week. This is how the sailors used to calculate where they were on the ocean.

Casting the log is said to have been invented in the 1500s. The first evidence of a ship’s log-book is from the 1600s. This is a guess, but it seems to me that the log-book would have been originally a record of the ship’s speeds—that eventually became a record of any important events that happened aboard the ship. With time, ‘log-book’ got shortened to ‘log.’

Today, people who post regularly on the worldwide web refer to their sad ramblings as a ‘web-log’ or ‘blog’ for short. Spare a thought for us poor, attention-starved souls.

More about time and distance.

Yes, yes, I know—my phone has been ringing off the hook with people calling to complain that this history of Western Civilization seems to be a history of telling time. Maybe you have a point. Maybe I have been concentrating too much on how the ancients reckoned time.

This history is about ideas. I want to tell how Western Civilization was shaped by innovation and invention. Look, would it make you all happier if I added a second topic? I admit, so far (even though we’ve only gotten as far as the Sumerians and Egyptians) I *have* been a little obsessed with timekeeping. How about if I start talking about how we’ve measured space?

What if we discovered that there’s a connection between time and space?

For instance: how far can you walk in an hour? If you keep up a steady pace, you’ll cover 3 miles. A long time ago, this unit of measurement was called a league. Most people traveled by walking. They knew that in an hour they could be somewhere 3 miles away. They were using time to measure distance.