Okay, now we know what Western Civ is, so let’s get started. We’re going all the way back to 4,000-2,000 bc. That’s 4,000 to 6,000 years ago. Sumer is considered to be the world’s first civilization. The Sumerians lived between the Tigris and Euphrates Rivers—today it’s the southern part of Iraq.

‘The land between the rivers’ (Mesopotamia) was fertile—the Sumerians could grow crops there because they figured out how to divert water from the rivers into the dry desert—so there was food for everybody. Sumeria had a government, a religion, and a writing system called cuneiform. 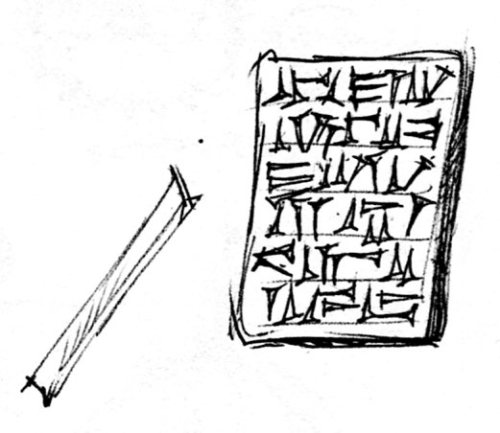 Cuneiform means ‘wedge-shaped.’ You use a wedge-shaped tool to press wedge-shapes into soft clay. I don’t know what it says; I made it up.

There was a big city called Ur; today we still describe city things as ‘urban.’ Sunday school students will remember that Ur was the city Abram moved away from so he could become Abraham.

I’m not positive luggage had been invented at this time.

The epic hero, Gilgamesh, lived in Ur. The Epic of Gilgamesh has been translated from pieced-together fragments of clay tablets, so you can still read it today. I have a paperback copy. The story has themes that can be found in the Biblical book of Genesis—a Tree of Life, a Tree of Knowledge, a great flood. Gilgamesh and his pal, Enkidu, gad about the ancient MidEast searching for the meaning of life and a way to become immortal.

Here’s one of the most surprising things about The Book of Job—the Lord and Satan appear together as if on the stage of a morality play. To top that, Satan makes a bet with the Lord—that deprived of his wealth, Job would curse God.

I’m trying to keep the dialogue here somewhat casual & conversational—after all, one point of this comic is to make Job’s story easier to read. I have God say: “How about that Job?…” The good old King James Version goes: “And the Lord said unto Satan, ‘Hast thou considered my servant Job, that there is none like him in the earth, a perfect and an upright man, one that feareth God, and escheweth evil?'” How I love that! Satan’s lines in the KJV are delightfully impertinent: “Then Satan answered the Lord, and said, ‘From going to and fro in the earth, and from walking up and down in it.'” (“Where’ve you been?” “Oh, out.”) This scene has echoes of ancient Near Eastern storytelling, where the gods and demi-gods have their squabbles. Gilgamesh and the gods and goddesses seemed always to have some tiff going on. Likewise in stories from Greek mythology.

As with the previous post, this is a sketch which will get inked in.