Loyal readers of this blog know that as you travel east or west, local time is determined by how far you are from the Prime Meridian. Each degree of longitude means 4 minutes of time difference. Wherever you happened to live in the United States in the 1800s, your town kept local time depending on when the Sun was highest—at noon. Your town’s time might be a few minutes different from the next town to the west or east.

That changed when the railroad connected the country.

Trains must keep to schedules! The boys in the railroad scheduling department didn’t want to pull out a sextant to know when the train would pull into the station in Grand Rapids or Medicine Hat or Lake Tahoe. They needed time to be simpler. So they dreamed up the idea of time zones.

That meant everybody in one time zone all kept the same time. If you travel over to the next time zone, you change your watch or clock by one full hour. A time zone represents 15° of longitude only roughly. Mostly it’s the states’ boundaries—not the actual meridian—that determine the split. If the state is too big to conveniently fit into 15 degrees, then county lines are used to define the time zone.
https://www.mapsofworld.com/time-zone-map/usa.html

So long, and thanks for all the longitude

After 19 years of tinkering John Harrison finally worked all the bugs out of his time-piece, the marine chronometer. To prove its reliability, he took it on a voyage from England to Jamaica.

“Harrison conducted a round-trip test at sea from Britain to Jamaica through the Caribbean via the Atlantic from 1761 to 1762. The watch lost only 5.1 seconds in 81 days, reaching the level of accuracy required to receive a £20,000 reward.

But just then a rival named Nevil Maskelyne, the head of the Greenwich Observatory and a member of the Commissioners for the Discovery of the Longitude, was vying to receive the same award for his astronomical theory. Maskelyne refused to recognize Harrison’s success. To Harrison’s chagrin, he was granted only a few thousand pounds.”
https://museum.seiko.co.jp/en/knowledge/inventors_02/

Well, how do you like that? This is why Maskelyne is always cast as the villain in this story. Seems like a conflict of interest to be on the Longitude Board if you’re also a competitor for the prize. It would be quite a while before Harrison finally got his reward—and that was only because King George III* stepped in to make the Board pay up.

My pal Kathryn Lasky wrote an award-winning book about John Harrison’s story, The Man Who Made Time Travel:
https://www.kathrynlasky.com/books/book/the-man-who-made-time-travel

Kathryn and I worked on Two Bad Pilgrims together. https://www.kathrynlasky.com/books/book/two-bad-pilgrims

* George III ruled Great Britain during the American Revolution. He was an enthusiastic friend to the Royal Navy. It was George who decreed that his sailors could toast the king’s health sitting down, because the deck-beams in the wardroom (officers’ dining room) were so low you’d likely crack your head if you stood.

Because metal springs are susceptible to temperature changes, which make them less reliable and accurate, Harrison invented the bimetallic strip. It is 2 metals, like steel and brass, welded together.

Did you get that? It’s possible to weld, or fuse, or something, steel and brass now. The watch’s mainspring needs always to be springy. When it’s cold, the spring becomes too stiff. When it’s hot, the spring becomes too loose. Harrison fused two metals together—steel and brass—in a spring. If the steel were too tight, the brass would keep it loose. If the brass were too loose, the steel would tighten it up. This way the spring would keep the same springiness no matter the temperature. 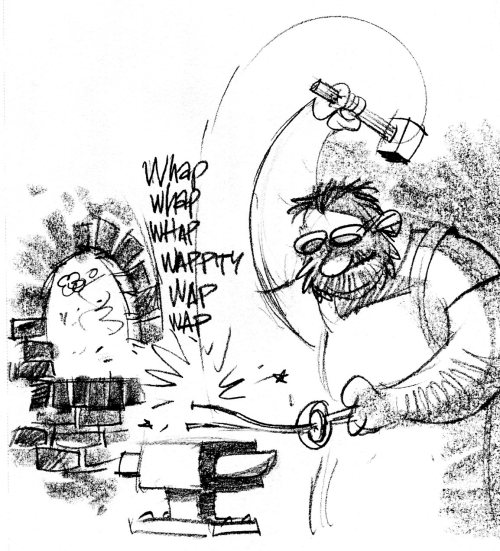 * This weekend I had the pleasure of consulting 2 engineers, my sister’s boyfriend Dave and my nephew Andrew. They tell me with enough heat, two different metals can be fused together. The two metals would be hammered together many times under heat until they were one. Andrew added that it’s only air molecules that keep metals from fusing together in the first place.

After breaking his heart trying to perfect a clock to keep accurate time on the high seas, Harrison refused to give up. He turned instead to perfecting a watch.

Well, maybe one small problem. When metal is warm, it expands slightly. When it cools, it contracts. This spring-powered timepiece was expected to be used in both tropical and arctic conditions. The temperature would change the character of the metal, which would make it less reliable, which would make the timepiece less accurate. 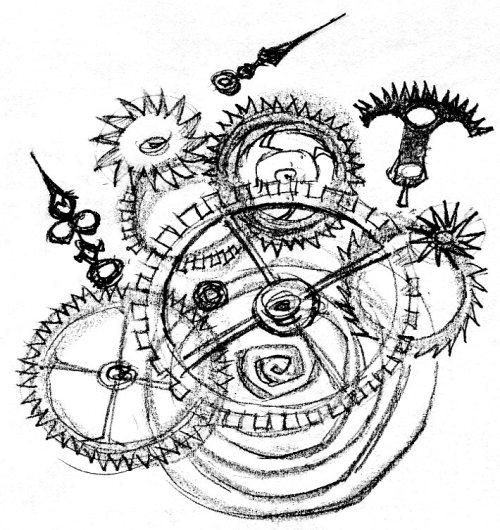 In our last post you saw how to find your location by observing the moon and stars to calculate lunar distance. The object is to know both your local time and prime meridian time, or Greenwich Mean Time. A navigator needs to be an astronomer and a math whiz to use this method.

You may have asked yourself, “Wouldn’t it be easier to keep 2 clocks aboard the ship—one showing Greenwich Mean Time and the other kept to local time?” That’s an excellent question and I’m glad you asked it. In fact, that’s the question John Harrison asked.

John Harrison was a cabinet-maker with a side business building and repairing clocks. To win the Longitude Prize, he went for a straightforward solution: build an accurate clock that always, ALWAYS showed precisely the correct time in Greenwich.