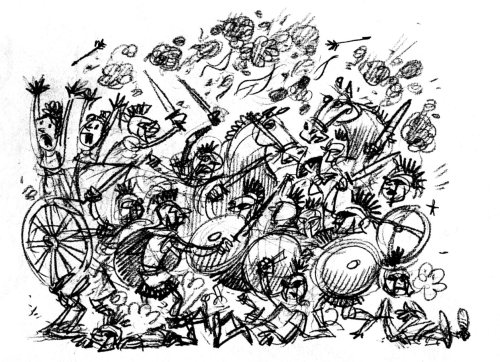 The Iliad is an epic poem written by the blind poet Homer in the 4th century bc, about events that happen during the siege of Troy—known back then as Ilium—in the 12th century bc.

In those days poems like the Iliad were recited in front of an audience. They were written with a specific rhythm and often-repeated phrases in order to help the poet memorize the whole thing. The Iliad is mostly about war, the destruction it causes, and a code of honor that was part of Greek culture.

Because I’m a swell guy, I condensed the whole Iliad in to one sentence. You can take a really deep breath and recite it without stopping:

Nine years into the Trojan War the Greeks attack a town on Troy’s side and make off with a couple of Trojan girls Chryseis and Briseis Agamemnon takes Chryseis and Achilles who is the Greeks’ best warrior takes Briseis to be their girlfriends Chryseis’s dad offers to pay to get her back but Agamemnon says no dice Dad prays to Apollo Apollo inflicts a plague on the Greeks and a lot of them die Agamemnon figures out making Chryseis his girlfriend is the cause of this plague so he gives her back but he still wants a girlfriend so he makes Achilles give him Briseis this ticks Achilles off so he says he’s not going to fight for the Greeks anymore and even asks his mom Thetis who is a sea-goddess remember she married the mortal Peleus and wouldn’t invite Eris to their wedding to ask Zeus to help the Trojans who are the Greeks’ enemies so Zeus is on Troy’s side now and Achilles won’t fight so the Greeks get their hats handed to them there’s lots of fighting with some featured fights between Paris the shepherd with the good judgement who stole the beautiful Helen and Menelaus who is Helen’s husband and Hector and Ajax the Greeks don’t do so good the Trojans beat the Greeks back as far as their ships Diomedes and Odysseus get some inside info about the Trojans’ battle plans but the Trojans set one of the Greek ships on fire so things are looking pretty bad for the Greeks because without the ships how do they get back home Achilles still won’t help his pals but Nestor says let Patroclus wear Achilles’ armor so the Greeks will think yay Achilles is back in the game Patroclus is good but Apollo sees what’s going on and knocks Patroclus’ armor off of him and Hector kills him the Greeks and Trojans fight over the body and armor Hector gets the armor the Greeks get Patroclus’ body Achilles feels like a heel and tells Agamemnon okay I’ll fight those Trojans now Achilles’ mom Thetis the sea-goddess gets the god Hephaestus to make Achilles some new armor and Achilles goes out to fight the Trojan army who for some reason are sleeping outside the city walls and when they see Achilles coming they say feet do your stuff and try to beat it back inside Troy but they’re not fast enough and Achilles kills every Trojan he sees he even fights the god of the river Xanthus who complains about all the dead bodies Achilles sees Hector and chases him around the city three times until Hector stops running and fights Achilles but Achilles kills Hector and ties Hector’s body to the back of his chariot and drags it back to the Greek camp Patroclus gets a big funeral Achilles drags Hector’s body in circles around Patroclus’ coffin every day for the next nine days Hector’s dad the king of Troy tells Achilles come on man that’s not right Achilles says yeah you’re right I’m sorry and returns Hector’s corpse to the Trojans Hector gets a big funeral and everybody stops fighting for a while.

The reason I’m telling you this is because I’m interested in how people thought about time. Homer’s poem is about things that happened 800 years before he was born. Maybe the Iliad was a comment on wars happening in Homer’s own time. It was definitely a way of remembering events long gone.

The Iliad is an epic story, but too fanciful to be considered a history. We’ll have to look to another Greek to see who invented the idea of history.

Thanks to Spark Notes

The Judgement of Parrots 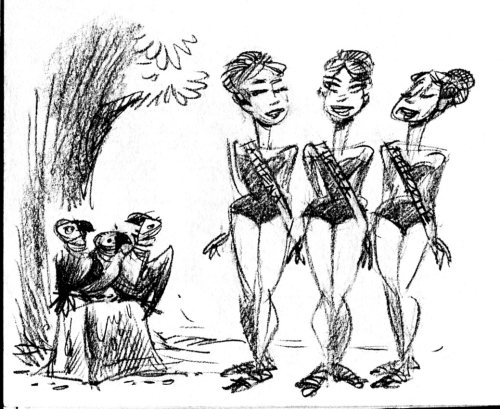 In Homer’s epic poem, the Iliad, the Trojan War got started because of a beauty contest, known as The Judgement of Parrots. The contest was between the three most beautiful goddesses of Mount Olympus—Aphrodite, Hera and Athena—and the winner got a golden apple. As best as I can tell, the goddesses must have asked some parrots to declare who was the most beautiful of them. I found many paintings of this scene, but all the great masters forgot to include the parrots, so I drew it myself. If you want something done right, do it yourself, as they say.