The Style Book of Alcuin

Something that’s intrigued me for many years: besides standardizing written Latin, did Alcuin standardize its pronunciation, too? I’ve been told that Alcuin instituted a policy of one consonant = one sound only, or one vowel = one sound only. I don’t know if a style guide by Alcuin exists. It’s hard to believe he didn’t write one. It would be such an Alcuin thing to do.

I suspect we have ecclesiastical (church) Latin because that’s the pronunciation Alcuin made official. Ecclesiastical Latin is why around Christmastime we sing “in eks SEL sees Dayo” and not “in eks KEL sees Dayo.” We use a soft palatal s or ch sound instead of the hard gutteral k sound the old Romans would have used. My own personal theory is that Alcuin was English, that’s the way they pronounced Latin in England, so that’s the pronunciation that got his stamp of approval. Who knows?

Angels We Have Heard on High:

From a few years back. I idiotically informed everyone that Alcuin was Irish: https://johnmanders.wordpress.com/western-civ/

Did Alcuin standardize Latin pronunciation in the Carolingian empire? from linguistics

This guy gets into the weeds a bit but he’s well worth the listen:

Embrace your inner Latin nerd! This is what the internet was built for. When I was a kid you’d have to go to college to hear a great lecture like this: 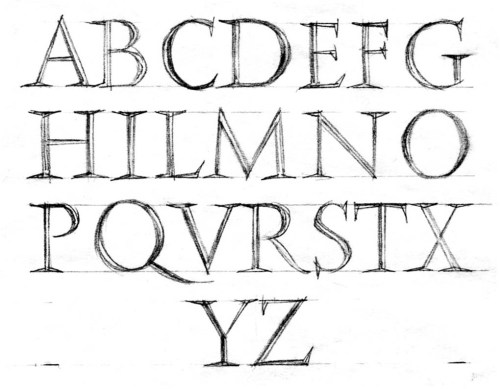 The old-style square-cap Latin was written in all capital letters, as if the ‘caps lock’ button were on the whole time. It reads like you’re being yelled at (maybe that was the idea).

In Alcuin’s day, monks wrote on parchment. Parchment isn’t cheap and all-caps takes up a lot of space. The monks learned to conserve space by making the first letter of a sentence a big capital letter and writing the rest of the sentence in small letters. The small letters were only an inch high—an ‘uncia’ in Latin—so this style of writing is called ‘uncial’ (OON se al).*

Uncials. Look how round they are compared to the Latin square-caps.

The small letters are called miniscules. The monks formed them with pens, so they became more round in contrast to the chiseled-in-stone letters of the old days. The miniscules grew tails, like ‘d’ or ‘p’ which extended up or down. They look different from capital letters.

This is the style Alcuin updated to Carolingian and promoted across the Holy Roman Empire. Latin translations of Arabic texts would be written in the Carolingian style. Alcuin dreamed up an additional feature: punctuation. Thanks to Alcuin you can tell when sentences end and new ones begin because they’re marked with a period. You can tell if the writer is asking a question, because there’s a question mark at the end. I’m personally grateful for the M-dash—which I probably overuse.

*…or maybe the monks shouldn’t be taken too literally. ‘Uncial’ may have been their jokey way of saying the letters are small.

https://www.merriam-webster.com/dictionary/uncial
https://www.britannica.com/topic/uncial
http://www.designhistory.org/Handwriting_pages/Uncials.html
http://www.designhistory.org/Handwriting_pages/Carolingian.html
https://www.britannica.com/topic/majuscule
I wanted to get a take on uncials from a calligrapher. Here’s that wonderful lady who makes her own ink. She says it’s St Jerome’s fault they’re called uncials. She shows you how to write them:
https://www.youtube.com/watch?v=VU-dHTEkAx0&t=335s
You weirdos who’ve been loyally following this blog will no doubt remember this post:
https://johnmanders.wordpress.com/2019/07/04/measuring-distance-in-rome/

Charlemagne wanted to promote a culture of learning throughout France and then the Holy Roman Empire. He didn’t have tv or the internet to spread this learning around, so Charlemagne would need to use books. Many of those old books from classical times (during the Greek & Roman Empires) were hard or impossible to find.

° Bad news: Charlemagne was made aware that many original manuscripts of ancient writers and philosophers had been lost or destroyed—like when the library at Alexandria got torched. Probably Alcuin and the other teachers told him.
° Good news: Charlemagne was made aware that copies of these ancient manuscripts existed in the Near- and MidEast, translated into Arabic. Probably Alcuin again.
° Plan of action: Charlemagne and Alcuin began an empire-wide program of finding the Arabic copies and translating them into Latin.

As I mentioned a few posts back, written Latin had taken on a different character in every different kingdom—it didn’t look like the square-cap Latin chiselled into a column that Julius Caesar would have recognized. Copying and translating these Arabic manuscripts would be a golden opportunity to standardize writing—get everybody in the empire writing the same way. Here’s the thing: instead of making all the monks go back to square-cap Latin, Alcuin had a different idea. He noticed that a lot of those regional writing quirks made Latin easier to read.

As you look at those old, old clay tablets with the weird, impossible-to-read cuneiform inscriptions, you have to wonder: how do we know what’s written on them? None of those symbols seem to resemble anything we recognize today. Yet somehow we got the epic of Gilgamesh.

Who figured it out? Who cracked the code? How was cuneiform deciphered?

At one point, the Persians’ head guy—the emperor, the shahanshah (king of kings)—was Darius the Great. What made him so great? Well, for one thing, he was a monster for organization and standardization. In other words, he liked understandable systems for complicated things. He liked it when merchandise weighed and cost the same wherever he went. Darius made weights and measures standard throughout the empire. He instituted universal currency—coins—which made it a whole lot easier to do business, because everybody knew how much something cost.