How come Egyptian hieroglyphics are recognizable to us, but Sumerian cuneiform isn’t?

The Sumerian scribes used a stylus to make marks in soft clay. A stylus pokes indentations into clay, but not strokes. They were limited to wedge-shapes because if they’d tried to draw a curve there would be a build-up of clay on one side of the stroke, like when a snow plow clears a road.

The Egyptians wrote on paper—to be specific, papyrus (pah PIE roos). Papyrus is a reed that grows around the Nile River delta. They found that you can soak the pith (the insides) of the reeds until it becomes soft, then pound it flat. The flattened strips are woven into a sheet, pressed and left to dry. When the sheet’s dry you can write or draw on it. 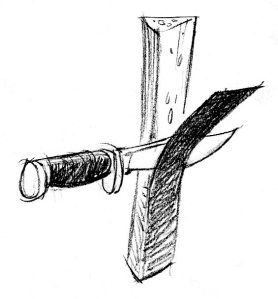 You cut the skin off a papyrus reed with a knife, leaving the pith. The pith is cut into strips.

Soak the pith strips in water. 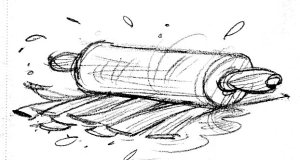 The strips are rolled flat.

The strips are woven into a sheet and left to dry under some heavy weight.

Ta-da! It’s a sheet of papyrus!

(I was right—the papyrus reed is triangular in cross-section. I hadn’t lost my marbles after all.)

I was telling you about the Sumerians and we kind of zoomed ahead to the Persian Empire because I needed to tell you how we are able to translate cuneiform. We skipped over a few thousand years and if I keep doing that this is going to be a really short book. So let’s pause for a moment and drift back to 6,000 bc or so and travel west from Mesopotamia to the northern edge of Africa—to Egypt. Just like the land between the Tigris and Euphrates Rivers, people settled along the banks of the Nile River because it was easy to grow food there. In fact, the area that contains all three rivers is known as the Fertile Crescent—where civilization got its start.

As you look at those old, old clay tablets with the weird, impossible-to-read cuneiform inscriptions, you have to wonder: how do we know what’s written on them? None of those symbols seem to resemble anything we recognize today. Yet somehow we got the epic of Gilgamesh.

Who figured it out? Who cracked the code? How was cuneiform deciphered?

At one point, the Persians’ head guy—the emperor, the shahanshah (king of kings)—was Darius the Great. What made him so great? Well, for one thing, he was a monster for organization and standardization. In other words, he liked understandable systems for complicated things. He liked it when merchandise weighed and cost the same wherever he went. Darius made weights and measures standard throughout the empire. He instituted universal currency—coins—which made it a whole lot easier to do business, because everybody knew how much something cost.

Here’s something else clay is good for: writing stuff down.

I’m just guessing here. How would you write a number before there were numbers?

Before it’s fired, clay is soft enough to make marks in. A Sumerian writer would spread out a blob of clay to make a flat tablet. A chicken farmer who wanted to count his chickens could draw little pictures of them on a clay tablet, instead of carrying around clay chicken-tokens. These drawings would have been very simple—maybe a dot and 2 lines for legs? A symbol of a chicken represented a real chicken. A symbol that represents a person, place or thing is called a pictogram. 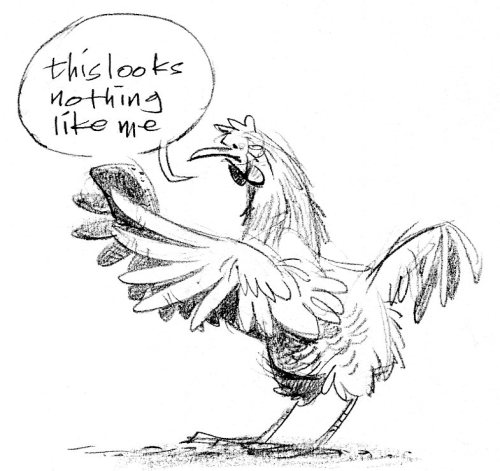 Counting your chickens before numbers

6000-2200 bc. Eventually people figured out it was a lot easier to raise livestock—animals that provide food—than chasing after them with bows and arrows. Human beings domesticated certain kinds of animals, like poultry (chickens), cattle, sheep and goats.

If you wanted to tell somebody how many chickens you owned, you couldn’t, because there weren’t any symbols for numbers.

My version of a clay chicken token.

It was pretty important to know how many chickens—or goats, or sheep—you owned. Sometimes people would keep a bag of pebbles. Each pebble represented a chicken or a goat. Eventually someone had the idea to make little clay chickens and goats. At the end of every day, the animals went back into their pens. As each chicken entered the coop, you could keep track by putting a clay chicken in your bag for every real chicken. As each goat entered the pen, you put a clay goat in your bag.

You get what’s happening here? We switched from making images of animals as grand wall paintings to inventing a token or symbol (a clay chicken) that represents a unit (a real chicken). That’s a big deal. These symbols were the first step toward a written language.

“What do you mean by that, Manders? Stop spewing gibberish!” Okay, okay. To make my point more clearly: look at the cartoons in this post. A cartoon will only represent what it was drawn to represent. Now look at the letters in this text. They’re symbols. The letters can be rearranged to make different words, to say anything you like. It will take a loooooong time to get from chicken tokens to an alphabet, but we’re on our way.

In the last post I said I’d tell you how Eratosthanes knew how many degrees of longitude Benghazi is from Alexandria.

We know that lines or parallels of latitude are about 69 miles apart. Latitude measures degrees of two 90° quarter-circles, each starting at the Equator and ending at the poles. The Equator is 0° and the North & South poles are 90°.

Longitude measures time. Or to be more precise, longitude converts time into degrees of a 360° circle. “WHAT?” I hear you holler as you spring from your comfy chair. “Have you finally lost your marbles, Manders?”

Al-Biruni (973–1048), another one of those amazingly-accomplished scholars

Ptolemy’s geocentric vision of the universe reckoned that Earth doesn’t move—she is stationary while the heavens whirl around her. But a Persian scholar, Al-Biruni, thought that the Earth spins on her axis—just like the globe in your classroom. If that were true (and of course it is), you’ll realize that the Earth spins all the way around every day, every 24 hours.

I drew 24 sections on this sphere—for the 24 hours it takes for Earth to spin around on her axis. Each line is a meridian, a longitude line.

THAT CHANGES EVERYTHING! Mapmakers could divide the Earth’s surface into 24 units. Each unit would represent one hour. Each unit would also represent 15 degrees. Why? Because there are 360 degrees in a circle. 360 divided by 24 equals 15. Now I ask you, who was it who divided the day into two 12-hour halves? Who was it who came up with Base Sixty counting, which makes it so easy to divide 360 by 24? Who? WHO?

The Sumerians, that’s who! I love those guys!

An Egyptian man plows a furrow so the lady can sow seeds into it.

Both the Sumerians and Egyptians had economies that depended on agriculture—they grew crops for their food. If you ever planted tomatoes—or onions, or zucchini, or those two-ton pumpkins you see at the state fair—in a garden, you’ll have seen on the seed packages instructions about when to plant. If you plant your tomatoes too late, the fruit will never ripen in time before the first frost. This is why calendars are so important.

The Egyptians’ planting schedule was built around their river, the Nile. Every year the Nile would flood. After the floodwater receded, it left behind nutrient-rich silt that improved the soil. Egyptian farmers had to plant crops as soon as the Nile receded so they could harvest before the Nile flooded again.

By around 2450 bc the Egyptians had developed a calendar whose year was twelve months. Each month was thirty days long (12 x 30 = 360 days). The year was divided into three seasons—Inundation, when the Nile was flooded (Akhet), Emergence, time to plant the crops (Peret), and Harvest, time to gather the crops (Shemu)—of four months each, with five days added to the end of the year.

In case you hadn’t noticed, the Egyptian calendar used Base Sixty for counting the days. I’d like to think they sent a nice thank-you note to the Sumerians.